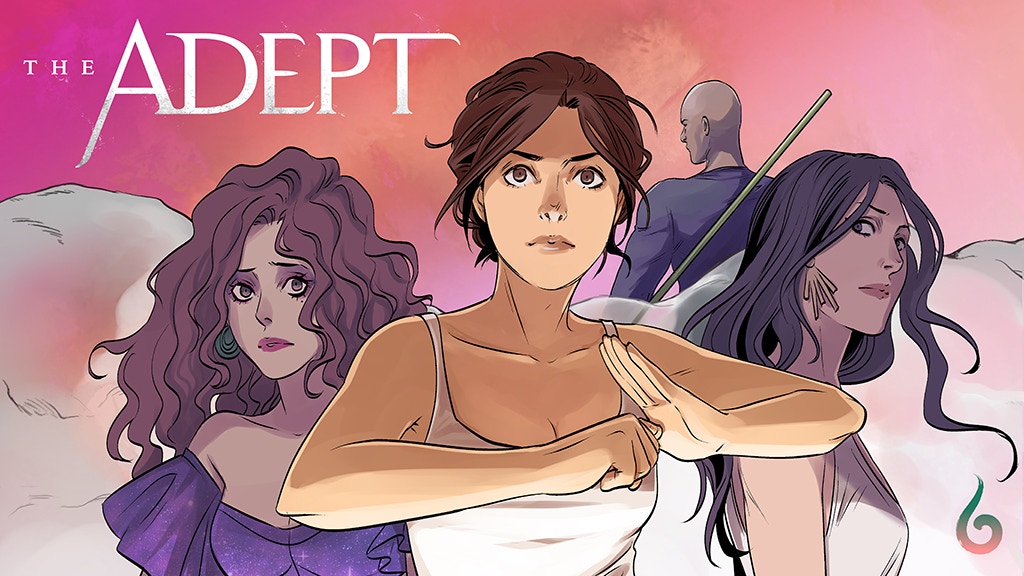 The home for authentic, elevated martial arts fantasy. THE ADEPT releases in October!

Latest Updates from Our Project:

We just crossed 700 backers at the Immortal Swordsmen campaign!


There is just ONE HOUR remaining to get your signed and numbered copy as previous backers of The Adept.  To do so, please sign up here and then back a physical tier of Immortal Swordsmen.


Let's have  a strong finish!

If you haven't yet, get on over to Immortal Swordsmen and consider backing that campaign.  We are down to the fiiiinal day.  Variant covers by Javi Fernandez (Spawn) and Bernard Chang (Superman, X-Men, Cable).  An exclusive Bernard Chang poster.  And of course - get yourself drawn into the Immortal Storyverse with our Draw-Me-In Tier.

Check it out here!

There are just two days remaining over on our Immortal Swordsmen campaign.  We are pushing to our $30K stretch goal which will unlock the Charlie Stickney-Yishan Li Adept crossover ministory.  We also still have a few of our exclusive covers left as well as our uber-tier - a chance to sit in with the Immortal comics advisory.

We have been so encouraged by our returning backers and the new ones - some of whom are also picking up copies of The Adept.  Remember, we have an exclusive offer for returning backers to receive signed copies of Immortal Swordsmen.  Check that offer out here and then come back to pledge.  We welcome you deeper into this martial arts fantasy universe and look forward to meeting our commitment of delivering a great book to you.  Help us finish strong!

We love recommending Kickstarter projects we read and back...and Rylend Grant's THE JUMP is one of those books.  THE JUMP is a thriller set in the world of astral projection where people have the ability to enter a dimension beyond the physical.  In this second issue, after a series of personal tragedies, Thomas Northrope joins an online community dedicated to astral projection.  When he demonstrates an unique aptitude for the practice, he is recruited by a mysterious organization to fight a larger war on the astral plane.  Rylend is the behind a number of books including THE PEACEKEEPERS, BANJAX, and ABERRANT as well as notching fifteen years as a Hollywood screenwriter.  Please check out the book.  It's great work.

We are thrilled to be amongst a group of legend Kickstarter creators hanging out with also-legend Wizard World.  We're doing a virtual campaign swap with free giveaways and a very exclusive offer - more on that below.  But first, check out this group:

We'll be streaming for an hour on Friday at 4pm PT/7pm ET, and you can join us for free by clicking here.

We're going to be chatting about our campaigns and the great community that is Kickstarter...but mostly talking about what makes our heroes, well, heroes.  Check out the project descriptions below to get a sense of how this group reflects the unique diversity of stories on Kickstarter.

OK, BUT WHAT ARE THE GIVEAWAYS?

First off, if you watch us live, you will be entered into a drawing to receive a prize package featuring work from each of our creators.  But moreso, if you back all six books, you will receive a rare print of all of our characters from artist Michael Watson. This is incredibly rare and not sure it has been done amongst the Kickstarter community before.

It will be available as a digital print to all digital backers, AND as a physical print for all physical backers.

IF you are not familiar with the work of these creators - check out their campaigns below:

Glarien of White Ash #1: a fantasy series for mature readers

Glarien follows the stories of two women and the different paths they take to overcome life-altering tragedies. Jumping from the elf realm of ancient Alfheim to the gritty streets of New York City circa 1971, two seemingly-unrelated tales will slowly weave together to reveal a critical piece of White Ash's complicated past. Oh, and because Glarien is involved, expect carnage... lots and LOTS of carnage.

This is Charlie Stickney's universe-expanding companion to the uber-successful WHITE ASH series.

EXCELLENCE is the story of Spencer Dales, born into a world of magic, and yet to reach his full potential, despite his family’s powerful bloodline. His father Raymond is a high-ranking member of The Aegis, a magical Illuminati-like faction who work to better the lives of others—those with “greater potential”—but never themselves. Now it's time for Spencer to follow in his famous father's footsteps, but all he sees is a broken system that’s shattered the relationship between father and son, and in need of someone with the wand and the will to finally change it. But in this fight for a better future, who will stand beside him?

I prob don't have to say much about this team but, if I need to place any more curiosity, this is the first book selected to be part of Skybound's signature series.  Khary Randolph teams up with Brandon Thomas, Emilio Lopez, and Deron Bennett bringing it with this super successful Kickstarter story.

They Call Her...The Dancer is a story that focuses on the beauty and brutality of dance and martial arts, delving into the morally gray psyche of a professional dancer and assassin.

At first glance, They Call Her…The Dancer is about analyzing the similarities and differences between dance and martial arts. Dance is something that is seen as beautiful, but many don’t think about the pain that is done to one’s body to truly be a dancer. Martial arts are thought of as violent because it’s a form of “fighting”, but there’s also a dance like quality to this work of art.

We might be biased (martial arts) but uhh...yes, please.  Super cool concept.  Kat Calamia is a Kickstarter pro of previous work like Like Father, Like Daughter, and here she is placing her creative lens towards a book that at its core is about mental health and the effects of trauma.

Ichabod Jones is about a mental patient that escapes from an asylum and becomes a monster hunter during the Apocalypse, but he doesn't know if he's killing monsters, humans, or it's all in his head the whole time.  The book takes an interesting turn on the hero concept: can a broken person, a society castoff, become a hero?

This is the 3rd issue of Russell Nohelty's Ichabod Jones series and a very personal book.  It's a Kickstarter gem and truly exudes where you can go with independent comics

A thief gets powers, is mistaken for a hero-- and runs with it! (with no intention of giving up her criminal ways, mind you!)

Impossible Jones is the energy and antics of Harley Quinn combined with the tweaked and twisted abilities of Plastic Man.

Karl Kesel is a another Kickstarter stalwart and these books are chock full of his mastery of tone.  This series is fun and raucous and a great homage to some of the comic characters we love.

We're up to 400 backers over on Chronicles!  And we just dropped our new Javier Fernandez cover (below).